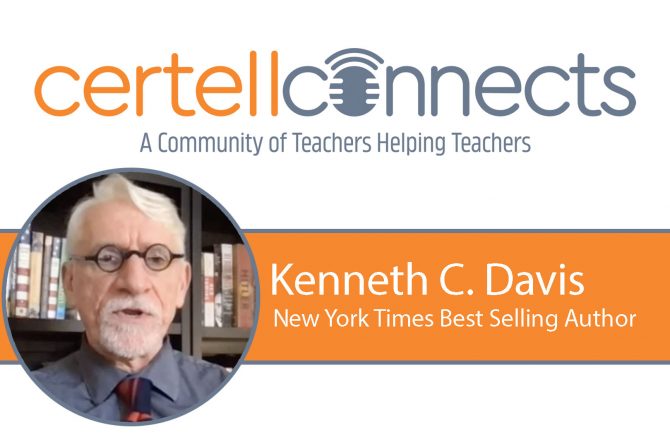 Fred Fransen and Kenneth C. Davis talk about some of the lessons we should have learned in history class.

BIO: Kenneth C. Davis is the New York Times–bestselling author of Don’tKnow Much About® History, which gave rise to the “Don’t Know Much About®”series of books, and America’s Hidden History. He is also the author of the critically acclaimed In the Shadow of Liberty: The Hidden History of Slavery, Four Presidents and Five Black Lives, a Finalist for the YALSA Award for Excellence in Young Adult Nonfiction and a Notable Book of the American Library Association in 2017. His book More Deadly Than War, was also named a Notable Trade Book for YoungPeople by the Children’s Book Council/National Council for the Social Studies.

His latest work, Strongman: The Rise of FiveDictators and the Fall of Democracy, was named a “Best Children’s and YoungAdult book of 2020” by the Washington Post and among the “Best YoungAdult Books of 2020” by Kirkus Reviews.

Davis has also written for the New York Times, Washington Post, and Smithsonian magazine, among other publications. A frequent guest on national television and radio, he has appeared on CBS ThisMorning, Today, and NPR. Davis was also featured in the CNN 2020documentary “Pandemic” about the 1918 influenza outbreak.

By Harrison
0
How the New-York Historical Society Helps Teachers With Leslie Hayes
The Power of Interacting with Real Stuff: Phoebe Hillemann